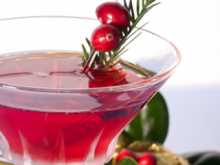 There's an xkcd comic that jokes that a very narrow window of blood alcohol content drastically strikes your programming ability. But could a little buzz actually make you smarter? A new study indicates that there's more truth to that strip that we had previously realized.
Andrew Jarosz, a psychology graduate student at the University of Illinois at Chicago, conducted an experiment with the help of his colleagues that demonstrates that being tipsy might actually boost your creativity and problem-solving skills before it reduces them. They got 20 social drinkers buzzed on vodka cranberry mixed drinks (in the name of science!), then asked them to complete a word association problem solving task. They were shown sets of three words each and had to come up with a fourth word that would make a phrase in English out of each of them. The tipsy fellows completed nine out of 15 sets on average, while the control group of 20 sober dudes could only solve about six of the 15 problems. Sober men took also took about four seconds longer to come up with their answers.
It seems as though a little social lubrication also serves to loosen the brain gears effectively. Psychologists hypothesize that the same lack of inhibition that makes you feel more comfortable socializing while intoxicated could also allow you to see patterns in places that your sober mind might not allow you to see. Your thoughts are looser, so your mind lets itself look for solutions in unlikely corners instead of just taking familiar routes.
Does this study mean that you should pre-game for your next English exam? Depends, but probably not--unless you're really very restrained in your boozing. The test subjects in Jarosz's experiment only got to a blood alcohol concentration of 0.075 percent, meaning that they were still good to drive legally at the time that they were completing the study. So while having half a beer before your next test might conceivably help you do better, you're going to have to make sure you keep your tipsiness within very specific parameters.
It's also been shown that drinking isn't the only method of warming up your mind to solving problems and thinking more efficiently. There are clean ways to get the same effect. Preliminary evidence shows that watching a movie or show that makes you feel good boosts your creativity as well. It seems that upping your mood ups your brain power no matter what the source.
< Previous post: