Go Ahead, Gaze Into It 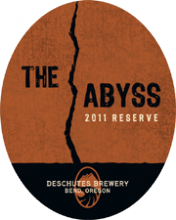 “The Abyss” from Deschutes Brewery is a superior stout, specifically a Russian Imperial Stout. Imperial stouts have quickly become one of my favorite types of beer. Why is that? Because I have always loved stout's dark color and rich, bitter flavor, but traditional stout suffers from two disadvantages.

It's a little bit heavy for drinking more than a single pint of it, and for all that it isn't very alcoholic. The result is that you can't get much of a buzz from it without filling yourself up till you feel like the Hindenberg.

Imperial stout, on the other hand, is simultaneously less heavy and more alcoholic- way more alcoholic, at 10-11%. Yet it still has the same dark color and flavor. So you get all the benefits of a stout and a malt liquor in one. (I can't believe I just typed that..)

“The Abyss” was obviously made with a great deal of love and attention. It's got layers and layers of subtle flavor, including just a small hint of molasses (don't worry, it really is just a hint).

My only quarrel with it is the price. A bottle of Lagunitas imperial stout is only five dollars, but a bottle of the Abyss is about ten. The Abyss is a bit superior, but is it really twice as good? If it isn't literally twice as good, then why am I paying twice as much for it? I'm not complaining about the beer itself, which is superb. I just think they ought to bring that price down a little if they can.

Oh, and I learned about this one from the folks at St Anthony Liquors in St Anthony, Minnesota- thanks guys, you steered me right!